I mentioned a few weeks back that Colin from Cine Films 2 DVD was sending some glamour films from GHM and I posted the Rusty Gaynor film that he converted and sent. Well since then I’ve decided to expand my collection and start buying and collecting a few 8mm and 16mm glamour films by Harrison Marks and others.

My first experiment in this was I came across a couple of 400ft 8mm films on eBay featuring 4 GHM films. The first reel featured Maid to Satisfy and Amorous Masseur, the second reel included The Casting Couch and Cous-Cous. The second reel of film jumped out at me because it features two films with two of my favourite models, Angela Duncan in The Casting Couch and obviously Sylvia Bayo in Cous-Cous. So I took a risk and bid on the films and won them and they quickly turned up and to my untrained eye looked to be OK, but you never can tell with old 8mm films as to what the quality is like or even if they are the actual films!

So now it was time to use Colin and his service to convert the films to digital, so off they were sent last week and I awaited in anticipation. Well the files arrived in my inbox yesterday and thankfully they were the films advertised and they were complete, phew! As to the conversion, well I’m happy with the files considering I’ve not seen digital versions of these available anywhere else. For old films over 50 years old they were dirty and did have marks and lines appearing during the conversion, but to be honest the quality of the films is still very good and at a good size conversion rate, allowing me to make smaller versions for online.

So now I have a digital copies of Maid to Satisfy, Amorous Masseur, The Casting Couch and Cous-Cous 🙂 I still need to convert them for the site, but looking through the films I do love Cous-Cous and captured a few screen shots directly from the file to tease you with. It of course features Sylvia Bayo, but also includes Tara Lynn, Sue Roberts, Jenny Lane (short hair) and Virginia Jones. So look out as Cous-Cous is coming!

Finally a big thank you to Colin for the conversions and I would highly recommend his service if you need your own cine films converting. Now I just need to decide what to do with the original films as I no longer need them with digital copies, maybe resell them to fund some more film purchases!

Another glamour film from the early days of Harrison Marks, under Kamera Cine Films No.38 titled ‘Rusty Gaynor’ (1963), no prizes for guessing who starred in this one! A simple story really, Rusty looks bored and lonely, so puts some music on and does a strip for us 🙂

Why another film so soon after the last one? Well I’m feeling generous and letting everyone see this one not just members, plus I have a new contact that converts old cine films into DVD’s and this is one that he sent me.

Thanks to Colin from Cine Films 2 DVD for sending this and over 30 other vintage glamour films, including a few of the harder stuff as well. These also included a few rare Wanda Liddell films I’ve never seen before, some more GHM films and Peta Gareth in a fully uncensored porn film! I’ll keep that till later and maybe let members see it. Anyway the quality of the conversions is fantastic considering the age of the films and you can find a link to Colin’s site on the right hand menu. Plus any Kamera Club member will get a special 10% discount on all conversions, just let him know you came from here. So a big thank you to Colin for this and all the other films he kindly sent over 🙂

Another vintage pamphlet from the late 1960’s advertising another set of 8mm colour films by Harrison Marks. These feature some of his later models in all their glory, including 3 featuring Cleo Simmons who also features on the front of the pamphlet. Other models include favourite Anna Verdi and Jutka ‘nipples’ Goz 🙂

A big thank you must go to Dave over at Rambooks, who scanned and sent this over along with some other great catalogue copies I’ve still to edit. 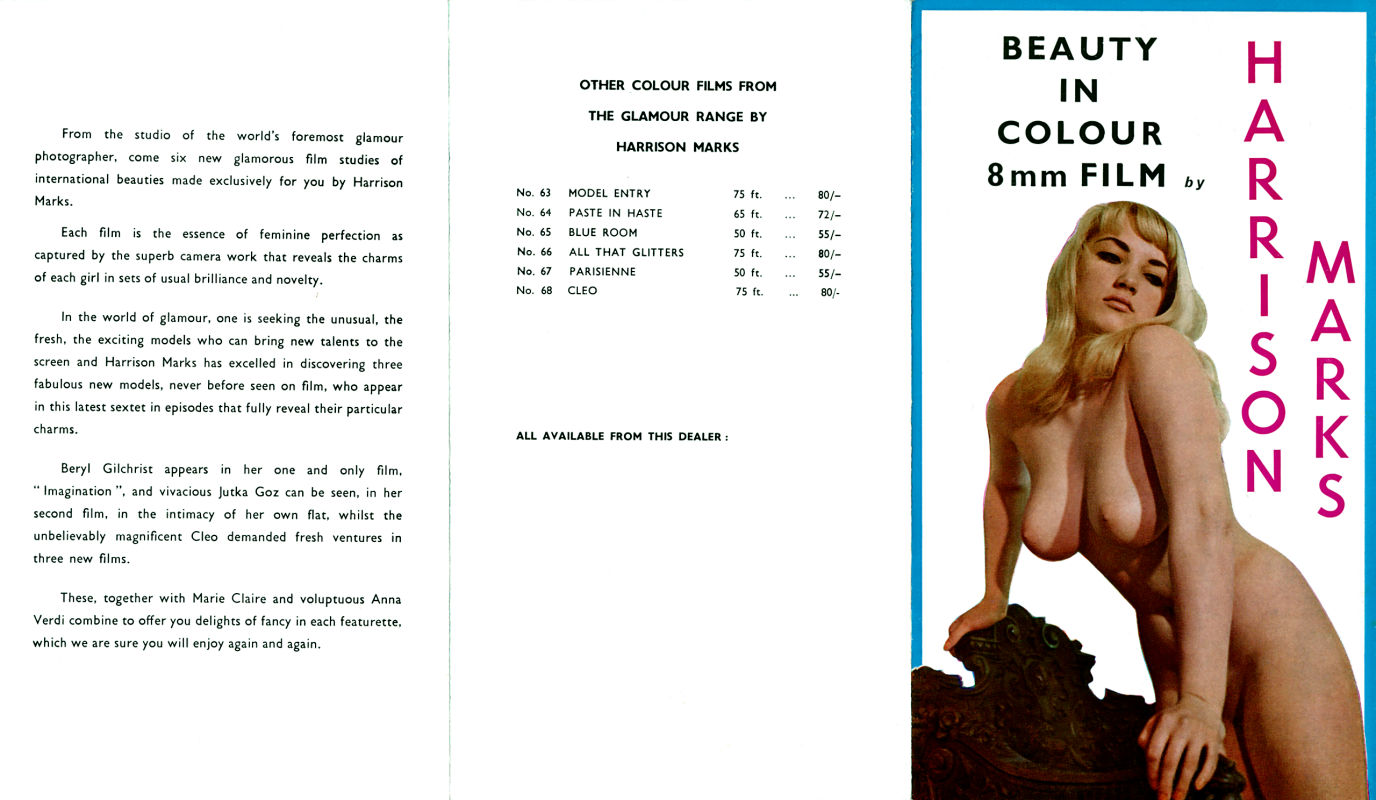 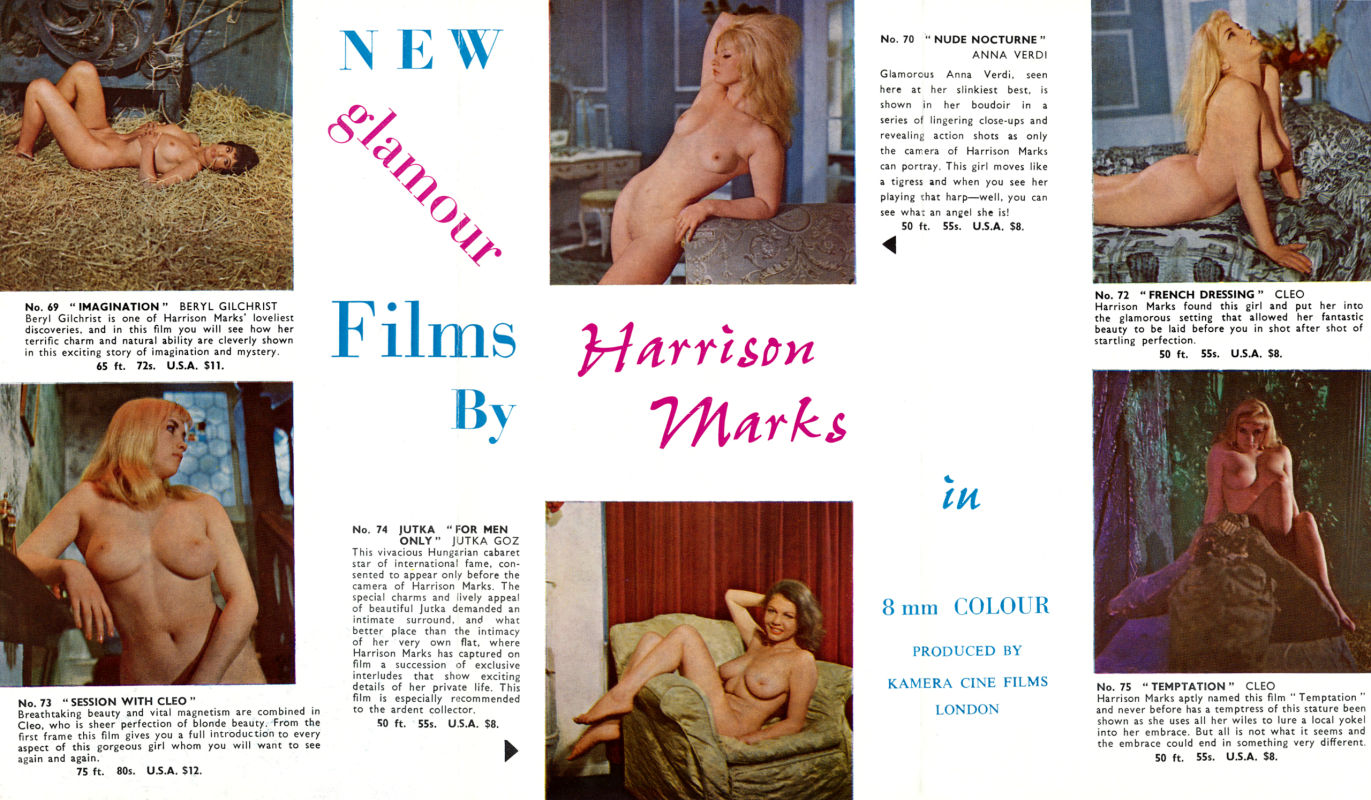 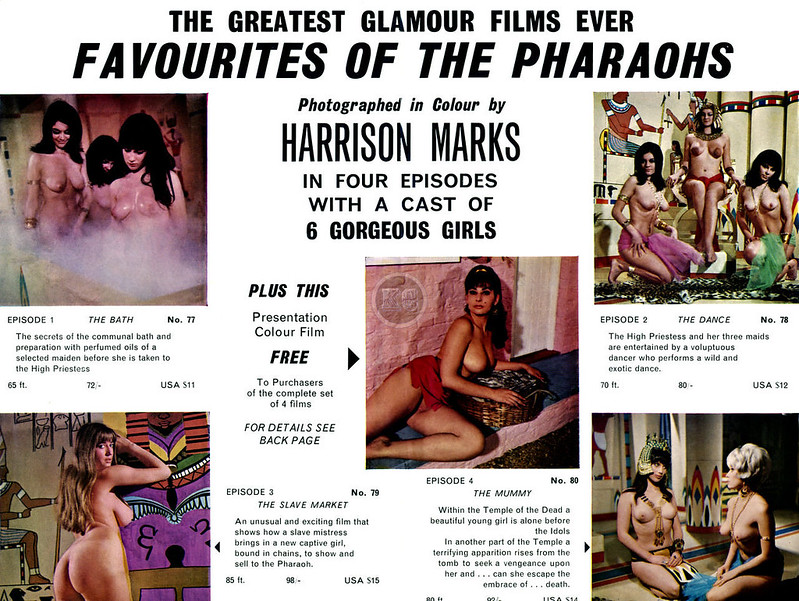 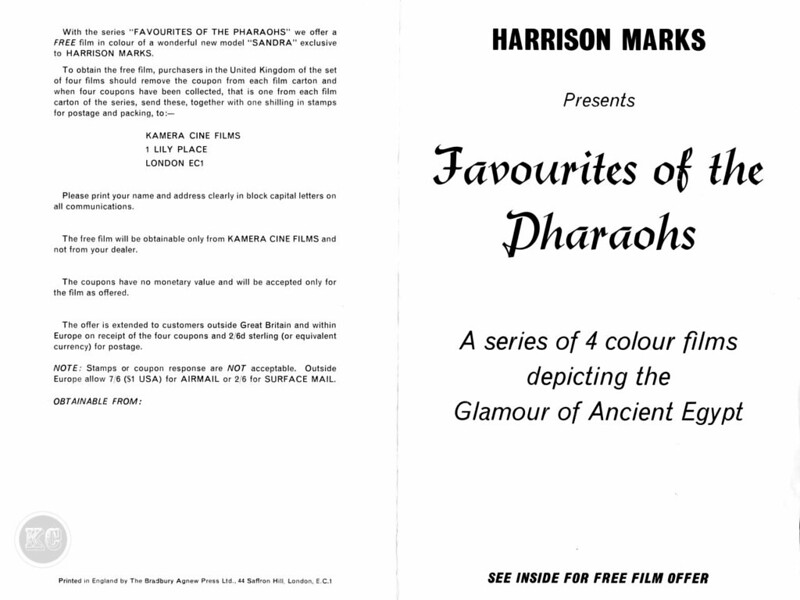 I love finding memorabilla connected to Harrison Marks and others, be it postcards, prints, magazine articles and catalogues. In this case it’s a 4 page leaflet advertising four Kamera Cine Films under the heading Favourites of the Pharaohs, featuring 6 models, although I’ve counted more! From top left going clockwise the films and models are:

The special offer of an exclusive colour film of Sanda is of course Sandra Cassano and hat a fabulous colour leaflet to add to my growing collection of vintage catalogues.

A big thank you must go to Dave over at Rambooks, who scanned and sent this over along with some other great catalogue copies I’ve still to edit, but I couldn’t resist this one! If your looking for a huge catalogue of vintage magazines and other memorabilia go give them a look 🙂