As promised and as it’s also Friday, time for a little video 🙂 For your delight we have the 8mm film featuring the dark skinned beauty Sylvia Bayo in Mayfair Film 08-027 ‘Girl Friday’ and published in standard 8mm and super 8mm format. Sylvia Bayo (aka Lucienne Camille) featured in Mayfair magazine Vol.5 No.1 (Jan 1970) and the `Girl Friday` film gets advertised in the very same magazine.

I’ll leave you to enjoy the film, but the official synopsis on the film is ‘Sylvia Bayo – dusky, exotic, playing the part of an au pair girl in a bachelor flat – who extends her duties and is caught in the act by his girlfriend. As Mayfair girl of the month she brought an incredible ovation from readers.’

Again a big thank you to Soundtrack68 for sending me a copy of this film and the quality isn’t that bad, although I think it’s far too short and needs to have more shots of Sylvia nude in it!

Now this was a pleasant surprise! A few weeks ago John W sent me another disc of June films from his collection that he had digitized, most were titles I know about, but sat amongst them was this little gem! A 8mm black and white film featuring June I hadn’t seen or known about! The title of the film pretty much says it all, as it features a young June and unknown friend, stripping on the river.

Details of the film can be seen in the box cover below, but it seems to have been produced by Stag Films and was film No.113 featuring Jane (June) and Gina messing about on the river. The other interesting thing is this is part 2, so there is another part to this film out there! I have no idea where or when this was filmed, but at several points during the film both June and Gina are seen coyly waving at passers by, luck them getting that view. 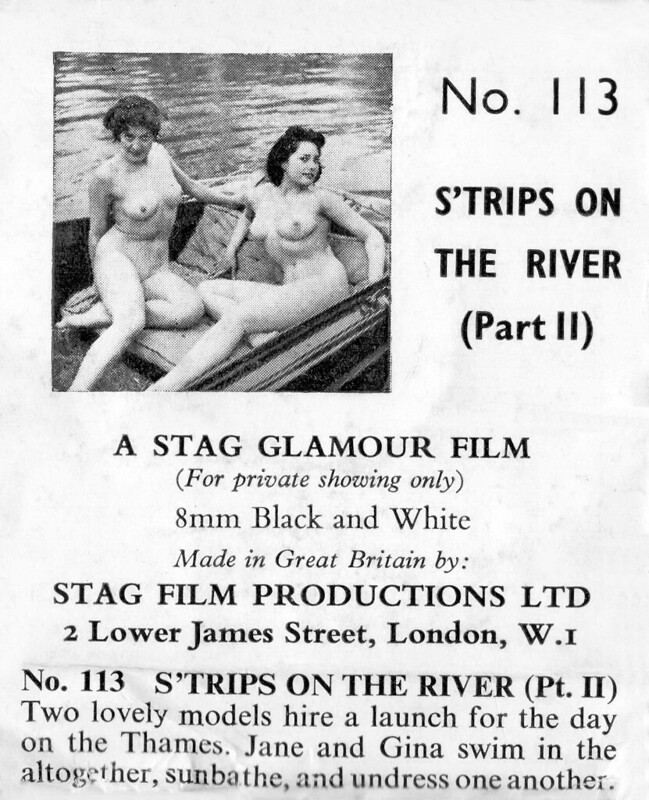 Enjoy this great little find of a new June film 🙂

Two more film strips from the black and white version of the glamour film ‘Castaway’ sent by John W. The first shows a close-up of a topless June, the second June of June sat on a towel rubbing suntan lotion all over herself.

What I’ve also noticed having looked at these and the colour version of ‘Castaway’ that these stills were also taken at the same time as June has the same jeans on!

I thought I’d try and do a video for a change and found this little beauty over on VEF with several other gems!
This is ‘Cover Girl’ (Film No.102) from 1960 featuring Erica in her only 8mm film appearance for Harrison Marks. It’s missing the opening credits, but is complete apart from that and is very good quality considering it’s age, but no sound on this one as I haven’t had time to add any. I’ll leave you to add your own sound effects! What else to say about this film other than letting you watch it? Well not only does it feature Erica and her fantastic body in all it’s glory, but also features Pamela Green, the man himself Harrison Marks and a brief appearance of Jean Spaul. You also get a look behind the scenes at the Gerrard Street studio and last but not least Erica oiled up! Enjoy!

Time for another video of June and this is an early one from the late 1950’s (circa 1959?) This 50ft 8mm glamour film titled ‘So Fur… So Good!’ was shot by Russell Gay and distributed through his company ‘Venus Films’ and came in two parts, which I have both! Part 1 below is in colour and runs for approx 3:42 minutes, with part two running for approximately the same time, but in black and white.  I think like other June films both parts were produced in both colour and black and white, hence one part in colour and one in B&W.

As you have seen by watching the film the premise of it is a simple one (were they ever complex!). June enters the bedroom with a new gift in the shape of a white mink stole. She proceeds to try it on and then subsequently strips off to try it on nude in front of a mirror, before laying on the bed to have a smoke, thus ends part one!  Additionally as well as a copy of this film I have also published a few still images taken by Russell Gay at the same time … Here

This along with many other films come from John W and his impressive collection of all things June.  He had the films converted from the original film onto DVD and added the music as all were originally silent.  I think the type of music suits the clip well and the conversion to DVD and colour of the film have transferred very well in this case.

Hope you enjoyed and part 2 to come soon.