Before my break there was a vote on the next set of glamour films people wished to see posted, with four new films up for the vote. The votes are finished and the results were as follows. The Casting Couch (Angela Duncan) – 33%, Bathing Beauty (Ann Austin) – 25%, Turn Me On! (Wanda Liddell) – 22% and Session with Cleo (Cleo Simmonds) – 20%. So we have a winner in The Casting Couch featuring Angela Duncan with Bathing Beauty next.

The Casting Couch film is 15 minutes long and although it highlights Angela Duncan as the main model, she only appears for just over 5 minutes of the film as a secretary at the beginning and briefly at the end, although you do get some fabulous views of her body. The majority of the film features another slimmer model being seduced on the Casting Couch, which happens to be Harrison Marks actual office and at The Halfway Inn! Members can enjoy the film below 🙂 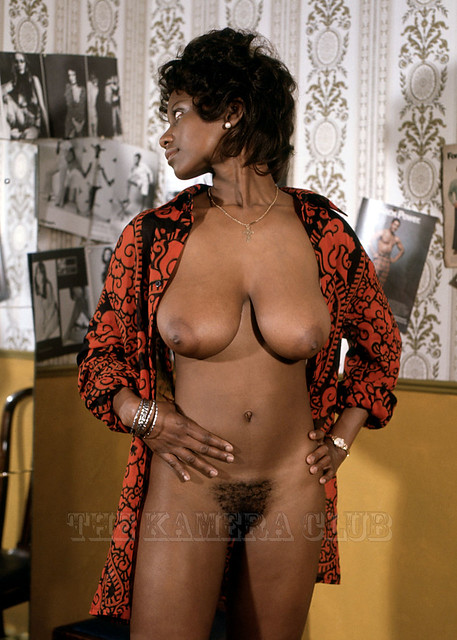 The final shot in my collection of ‘Ronnie’ from a film still of the Harrison Marks 1971 glamour film ‘Tailor Made’. Ronnie obviously being non other than Veronica Diemen.

I love the whole composition of these shots, from the way she is stood with that red dress open exposing her big tits and dark pussy, to the way she looks over her shoulder at her reflection in the mirror.  So much going on you don’t know where to look next (apart from the obvious places!). The hands on the hips work as well for two reasons, it keeps the dress open for us to see her body, but also cleverly manages to hide a scar Veronica has on her lower right side, which you can just see in this other shot.

A fabulous view of Veronica and members get to see the full medium format version, which shows off a lot more of the scenery behind her 🙂

Forget the coming European Elections as there’s a much more important vote that needs your attention! The vote for the next set of glamour video’s to be published, which is of course far more important. This time I’m offering you a collection of 4 very different video’s for you to consider from my collection and to help in this important decision I’ve included a brief description of each film, the models and some screen caps to help

The votes are open for a week and as last time you get two votes each, so again choose wisely on the video you want to see first. The voting is at the bottom of the page after the descriptions. Your vote Counts 🙂

Turn Me On! (Wanda Liddell) – A unretouched softcore colour film featuring Wanda Liddell and the TV repair man. Who needs TV with a bush like that!

Which Film Would You Like To Titillate You First?

Time for the third film from my recent vote on which films to post next and this one is the anticipated 8mm glamour film No. E300 – ‘Diane Unretouched’ by Harrison Marks. The images above are scanned from the box itself, but quality isn’t that good, but I’ve tried to restore it. Diane to those that know is actually popular GHM model Nicky Stevens posing on the well used bedroom set.

The film itself is classed as an unretouched continental type film, which basically means it’s not censored. That all sounds rather exciting, but what it actually meant was a little less camera work for GHM as he could film Nicky without trying to avoid showing her whole body in shot including lower region. In his other normal type glamour films he always avoided showing anything to risque to get it past the censors, but with this film no such restrictions were in place. This means we get over 4 minutes of film showing off Nicky and her body and bush as she strips and parades her body for the camera on the bed. Obviously Members can enjoy the film below 😉

Well the votes are in and it seems like June Palmer is as popular as ever and won the poll with 36% of the vote for the next video to be posted from a list of 4 new films I received. Always a pleasure to see more June and next up comes Done by Suction featuring Terry Graham and a vacuum  🙂

So it gives me pleasure to present (For Members) the 1967 Harrison Marks glamour film ‘The Naked World of June Palmer’ including the front and rear cover of the box, that gives you details of the film, enjoy!