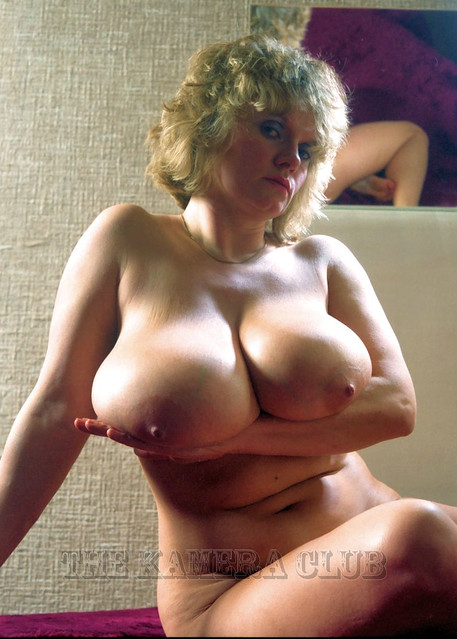 I’ve recently been asked if I had any more shots of Toni Kessering as I published an original shot of her in 2013 on the site, so thought it was about time for another shot. Rather than use one of the thousands of shots of Toni you can find I thought I’d post another original shot.

This shot was taken back in 1988 by none other than member John W, who not only photographed June Palmer, but also Toni and a few others. Judy Conway, or better known as Toni Kessering (Toni Francis) and was best known for her large natural breasts, earning the nickname “Titanic Toni” for her figure, reportedly 44-27-38 (bra size 38 J cup). This shot from John sure shows those massive tits off to good effect as Toni supports them with one arm. It gives me backache just looking at the size of them and how heavy those hangers must have been! 🙂

Thanks to John I have several more original shots of Toni including three shots of that John converted into Anaglyph 3D and my god those tits look even bigger in 3D if that’s possible! I make no apology for the crass title it just seemed appropriate!  There is also no tenuous link to publishing this on my blog this time, other than it’s an original and taken by John W himself!  I must admit I’ve had this image for a few months now and just keep staring at it and thought I must share it at some point.
This is Judy Conway, or better known as Toni Kessering (Toni Francis) and was best known for her large natural breasts, earning the nickname “Titanic Toni” (which she reportedly dislikes) for her figure, reportedly 44-27-38 (bra size 38 J cup). She was best known as an English adult model and porn star during the 1970’s and 1980’s and her pages over on VEF, show she was up for pretty much anything!
This shot was taken in 1988 at Tower Studio’s by John himself and the pose shows off her biggest assets to great effect!  I don’t know if there were any others taken by John as this was the only shot he sent me, but I’m sure if we ask nicely he may share some more if he has them 🙂

So, sorry no real link to the site, but let’s just enjoy one of the biggest pair of tits I’ve ever seen!

Note: This is an original image and subject to this copyright notice, but can be individually shared as long as the image remains unaltered and this website is acknowledged as the source.
error: