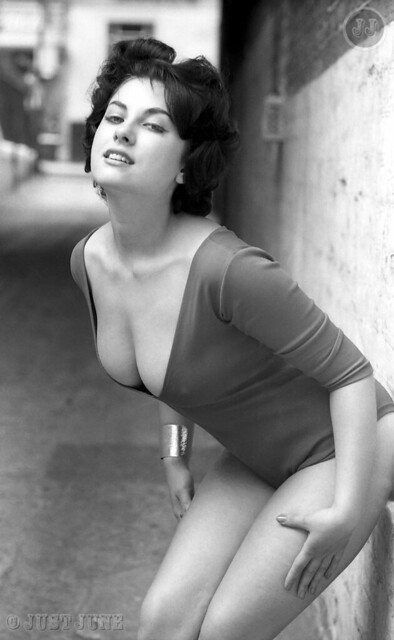 The second and final shot of June posing in an alleyway dressed in a leotard, but wearing it well and showing a bit of cleavage and a hint of nipple through the material. As discussed in the other post here, I wondered about the location of this shot and if it were near to Strobe Studio’s? Thanks to several members including ‘Gypsy Re Bethe’ the location has been confirmed as an Army parade ground at the back of Strobe Studio’s in St John’s Hill. Re knew June for many many years and knows the location very well and helped identify the location of this shot, plus helped me with other locations in other shots.

Unfortunately, the last shot from this set that I have, although I have seen others of lower quality of June from this set and similar posing on the back of a car. 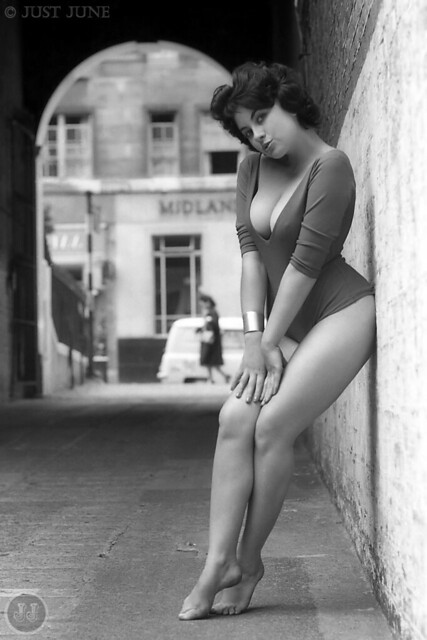 I’ve just received another CD full of original June images from John W from a couple of 35mm films he’s purchased and the disc contains several interesting sets of a young June. There are additional images of June in leggings on the castle battlements, some of which I’ve already posted, a set of June dressed in the park and this shot! There are two shots from this set of June in the Alleyway, this one and one other, which is a shame as they are fantastic shots.

I love the pose from June in the leotard as she leans against the alley wall, with a buxom bosom showing, but I’m also sadly intrigued by the location and where this was taken. I wonder if it was taken near Strobe studio’s in Clapham and as you look back up through the alley you see a woman walking past what I think is a sign for Midland Bank?